Cyber Monday: What Did I Buy? Shop Handmade

Like many of us, I was glued to my computer for the past weekend, checking sales and getting ideas for what to purchase as gifts for the upcoming Christmas/holiday season. Philadelphia’s own The Clay Studio ran a wonderful “Cyber Monday” promo starting last weekend and ending this past Monday for free shipping anywhere in the U.S. with any shop order. Even though I am a frequent visitor to the downtown city, life in the suburbs makes one jump at a chance to receive a fantastic deal on wonderfully exquisite handmade items, such as these.

Jennifer Martin’s piece is a gorgeous mug that at first glance appears to be completely wheel-thrown; however, one can easily see how Martin takes her pieces off the wheel and manipulates the porcelain into a completely fluid object that according to her artist statement, references the human form. After one utilizes this mug for morning coffee or afternoon tea, there is no way possible to be able to attain that same level of enjoyment that Martin’s mug provides if using a mass-produced ceramic mug from Pottery Barn or Crate and Barrel, two of the most popular U.S. retailers for gift registries. 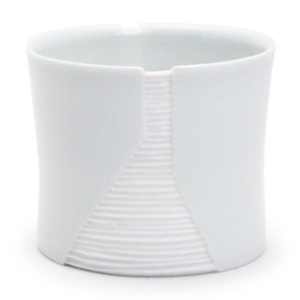 Bryan Hopkins’ Short Cup is a truly delicate piece of porcelain that one cannot possibly realize from just this photo that it’s as lightweight and seemingly comfortable to the user as a functional vessel can possibly be. However, as I was unpacking this piece and holding it in my hands, it occurred to me that this may be a cup that is more representative of a precious artifact – something that I would be less likely to use for example as a drinking cup to pour my hot tea into directly – nor offer to a visiting guest for “fear” that he or she could mishandle my newly found “precious”. Regardless, I’ve admired Hopkins’ work for ages, and enjoyed seeing pieces just like this one in-person at The Clay Studio’s recent exhibit, “Pots at Rest” that explored the relevance of handmade tableware in the 21st century. 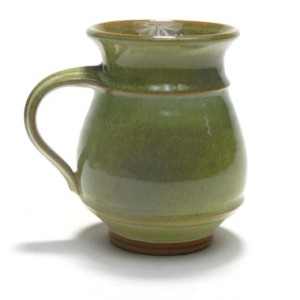 Debbie Williams, a locally-based functional potter and ceramics instructor from southern New Jersey, creates highly functional stoneware pieces that are a combination of hand building and wheel-thrown objects. Williams fires her pieces in an electric kiln, but the glazes that she uses have an atmospheric and almost “aquatic glow” to them. Having been trained as a sculptor initially, she allows both ideologies to influence her pottery pieces but does not in any way sacrifice the utilitarian purpose of having each piece be food-safe, dishwasher, oven and microwave safe. Having received one of Williams’ pieces as a gift previously, I can attest to having enjoyed daily use of her stoneware mugs, and would not be adverse to receiving more of her lovely pieces as a holiday present.

Incidentally, The Clay Studio has received a Knight Arts Challenge grant by The Knight Foundation: any mug purchased at the store, whether online or in-person at the Old City Philadelphia location between now and February 2013 will be considered a matching contribution to the initial $15,000 grant received for its recently highly-publicized “Guerilla Mug Assault” that took place on the city streets of downtown Philadelphia in November 2012.

Except where noted, images are courtesy of The Clay Studio, Philadelphia.

Patricia Sullivan is a metalsmith and studio artist – living in the suburbs of Philadelphia across the great Delaware River in Southern New Jersey for the past 12 years. She spent seven years prior, living in both New York City and the Hudson Valley, New York, studying at Parsons School of Design, moving onward to receive a second degree (post-graduate) in Fine Arts/Metals at SUNY New Paltz. A Philadelphia native, Patricia was exposed to the arts and music of this region since a young age, receiving her first Bachelor's degree at Temple University in Philadelphia before her sojourn to New York began. Patricia has exhibited her artwork nationally. Recently, Ms. Sullivan was one of only thirty-four artists worldwide to exhibit her work at the Center for Craft, Creativity & Design as part of being selected for Metalsmith magazine's prestigious annual "Exhibition in Print - Moved by Metal."

10 replies on “Cyber Monday: What Did I Buy? Shop Handmade”